To record their first release in three years, Vancouver-based indie folk collective The Fugitives was just hoping to stay home. After eight years of touring Canada and Europe, they’d... 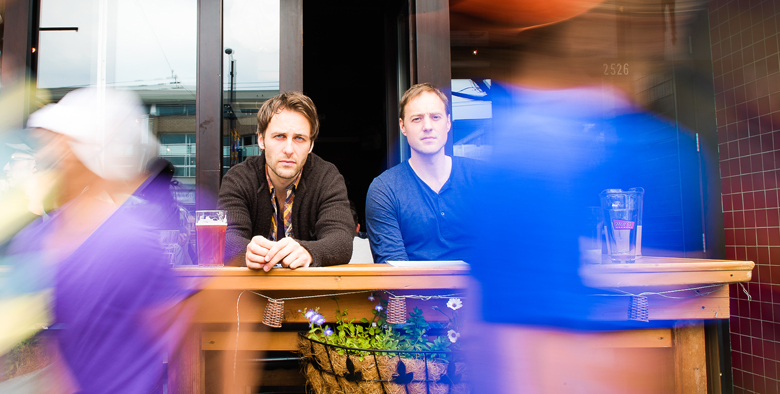 To record their first release in three years, Vancouver-based indie folk collective The Fugitives was just hoping to stay home. After eight years of touring Canada and Europe, they’d drained most of the romance out of cramped cars, long roads, and eating sandwiches out of gas station refrigerators. So they surprised themselves by trucking three thousand kilometres to record Everything Will Happen, their new LP from Light Organ Records, in Toronto.

A big reason was the chance to work with producer John Critchley (Dan Mangan, Elliot BROOD, Amelia Curran). The other might be that they feel most at home in new territory. When not touring as musicians, current frontmen and songwriters Brendan McLeod and Adrian Glynn are active in other artistic pursuits. McLeod is an award winning novelist and former Canadian SLAM poetry champion, while Glynn is a working actor who received rave reviews for his role in Chelsea Hotel, a play based on the songs and poems of Leonard Cohen.

Their band is similarly eclectic, boasting prominent former members like Mark Berube and CR Avery, and a current rotating cast of supporters that includes violin-looping prodigy Hannah Epperson, multi-instrumentalist Steve Charles, and renowned actor Benjamin Elliot, alongside a host of multi-instrumentalists whose styles range from bluegrass to jazz.
This diversity has carried over to their records and live performances. Their first full-length received a Canadian Folk Music Award nomination for “Pushing the Boundaries” of contemporary roots music, and their follow-up was praised for being “eclectic and exciting” (See) , “poignant” (Uptown), and “infectious” (CBC). They’ve gone on to sell out shows at venues as diverse as the Vienna Literary Festival, the Winnipeg Fringe Theatre Festival, and the Vancouver Jazz Festival, while maintaining a frequent spot on the Canadian folk festival circuit. As McLeod puts it, “We’re like Broken Social Scene. But acoustic, and way less famous.” Bigger than Luck, the EP precursor to Everything Will Happen, spent ten weeks on the top ten Canadian folk charts. Everything Will Happen was nominated for a Western Canadian Music Award for best roots album (duo or group), and supported by tours across six countries, in which the band earned a spot at Glastonbury Music Festival, and a two week stint supporting Canadian music legend Buffy Sainte-Marie. And now, on to more gas station sandwiches.