Every great story is like a long winding road, no matter where it leads, it has to start somewhere. It’s been a decade since singer Matt Layzell and guitarist... 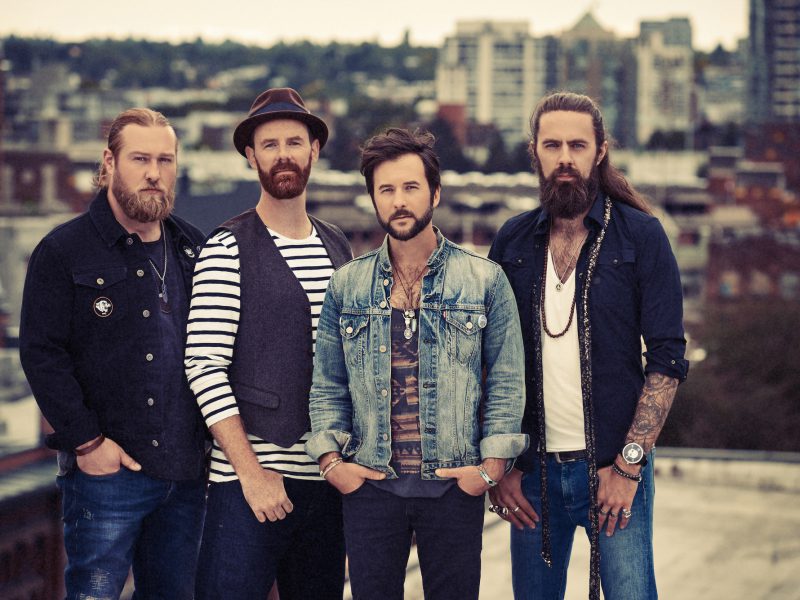 Every great story is like a long winding road, no matter where it leads, it has to start somewhere.

It’s been a decade since singer Matt Layzell and guitarist Matt Rose spenta few hazy days writing songs in a rustic cabin in Desolation Sound on British Columbia’s Sunshine Coast. Since then, The Matinée has evolved from its humble origins, navigating their own route, to become a powerhouse roots-rock band with a following spread across North America. Having spent years logging miles in the tour van and dropping sweat on stages near and far, the four-piece — which also includes drummer Peter Lemon and guitarist Geoff Petrie — is making its most electrifying statement yet with their sophomore album Dancing on Your Grave.

The four friends, who were high school cohorts before their musical paths intertwined, spent their first few years as a band cutting their teeth on the road. They become familiar faces at every small bar and venue around their hometown of Vancouver, and they honed their chops playing small clubs nationwide. “It was a means for all of us to travel across the country, throw a tent along the road, and get some free beer,” remembers Layzell.
Things changed in 2013, when the group signed to Light Organ Records and released its debut album, We Swore We’d See the Sunrise. Recorded at the prestigious Armoury Studios with Grammy award-winning producer Steve Berlin (The Tragically Hip, Los Lobos), the record’s salt-of-the-earth rock sound made a splash on radio across North America and earned the outfit a string of prominent festival bookings across Canada and the U.S.A.

In 2015, they linked up with Mounties members Steve Bays (Hot Hot Heat) and Ryan Dahle (Limblifter) who produced the 2015 EP Broken Arrows and helped to nurture the ensemble’s gritty rock influences. The result; the first single off the record, Temper Temper, hit #1 on the CBC Radio 3 national charts.

The Matinée’s latest full-length represents the triumphant culmination of its achievements to date. A heart-swelling collision of hook-infused rock and earthy roots influences, the album was produced by Jamie Candiloro (R.E.M., Ryan Adams) and recorded at Light Organ’s own 604 Studios. The sessions took place in the wake of a series of personal upheavals within the group: marriages, children, and an emotional breakup saw each member take time away from the band to gain some much needed perspective. “We were all going through big life changes,” Layzell recalls. “After a difficult split, I found myself disappearing on solo road trips into the wild with my dog, trying to clear my head.”

When the guys finally got back to work, the connection was instantaneous. Songs began pouring out of them, and they continued writing in the midst of the three weeks they spent in the studio. “We wrote over 40 songs for this record,” adds Layzell. “Of the 11 that are on the record, more than half of them were written in the studio while we were doing the session. The songs were so fresh. We were learning them as we were playing them.” They captured most of the parts live off the floor, channeling the magnetic energy of their explosive shows into the recordings.

Among the spontaneously composed tunes is the lead single and title track “Dancing on Your Grave.” With its cloud-scraping guitar grooves and rich harmonies, it’s a big-hearted tribute to Layzell’s late grandfather that turns the tragedy of death into a euphoric celebration of a life well lived. Elsewhere on the record, “Blood Alley” is a climatic, barn-burning roots rock anthem that addresses Vancouver’s gentrification, while “The Living” combines the click-clack of castanets with atmospheric effects and a towering chorus that’s destined to become a concert singalong. The diversity of the band’s influences is also apparent on “Long Gone,” a floorboard-stomping hoedown full of acoustic strums, banjo twang and rousing group shouts.

Ultimately, Dancing on Your Grave is the perfect distillation of the chemistry between these longtime friends and collaborators. Having spent over a decade together, they’ve emerged with a sound that’s tighter and more dynamic than ever. “No matter what, we’re going to keep doing what we love to do” says the frontman. “We truly love playing as a group, whether it’s for 5 people or 5000 people.” And with this new collection of songs ready to release, that long winding road seems to be leading towards the latter.