What does it mean to fall in love in the 21st century? American Love, the aptly titled forthcoming album from Toronto indie-rockers Fast Romantics, is a nod to the... 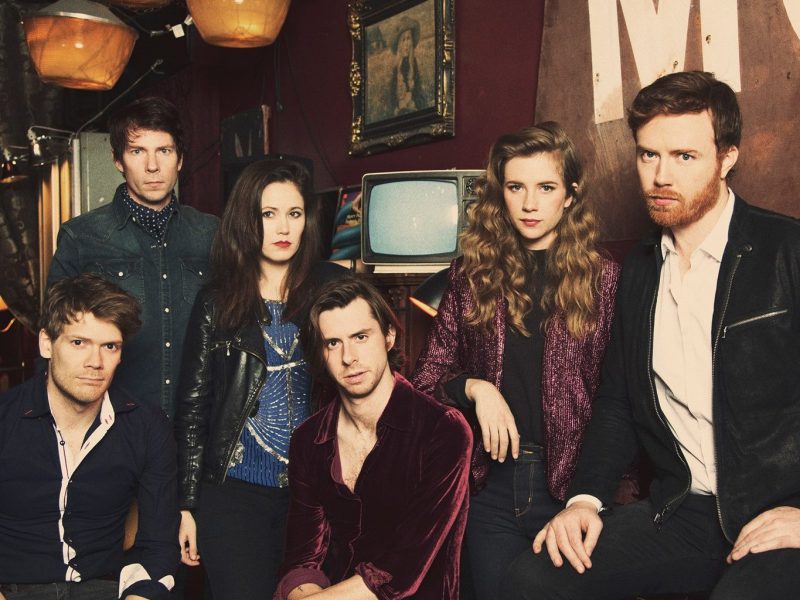 What does it mean to fall in love in the 21st century? American Love, the aptly titled forthcoming album from Toronto indie-rockers Fast Romantics, is a nod to the type of cinematic storybook romance Hollywood has conditioned us to search for. But in real life, love is often subject to chaos beyond our control, and American Love doesn’t deny the social and political turmoil we’re living through.

“I was falling pretty hard in love when we started the record,” explains frontman and lyricist Matthew Angus. “But the rest of the world went mad. This bizarre election in the United States started up just as everybody’s obsession with social media hit some kind of peak, and suddenly everyone was talking about America. It started seeping into the songwriting, and now I’m not even sure what came first. Are they love songs about politics or political songs about love?”

But Angus insists that American Love, produced by the dynamic duo of Gus Van Go and Werner F (Arkells, Wintersleep, Whitehorse) is not a traditional protest record. Rather, it’s a series of reflections by a non-American songwriter living so close to the border, hyper-aware of the United States and its influence on his own country. This duality is reinforced by geography itself, as the songs on American Love were recorded over two years alternating between Brooklyn and Toronto. It’s also fitting that work on the album began around the same time the U.S. election campaign launched, with the final song finished almost two years later, on election day.
“I don’t feel like these songs are set in just one country. Borders are blurring,” Angus says. “What does it mean to be Canadian, or American, or Chinese, or British? We’ve all got Twitter, we can all stream the BBC, but does that mean we’re becoming the same? There was this international identity crisis happening in both countries, and I found myself caught in the middle of it while trying to write a bunch of love songs. “

American Love serves as a follow-up to Fast Romantics’ 2013 LP, Afterlife Blues, bringing together the most lyrical songs Angus has ever composed. The group, originally founded in 2008 in Calgary, lost most of its members around the time they were set to record their breakthrough single, “Julia, in 2014. Founders Angus and Jeffrey Lewis were forced to rebuild the band from scratch. But this didn’t slow down the group — or the success of the single — and Fast Romantics took home the prestigious 2016 SOCAN National Songwriting Prize for the track. This can be added to an ever-growing list of accolades for the band, which took home the prize for Pop Group of the Year at the Sirius XM Indies in 2014, and has been climbing the charts on commercial radio.

Always drawn to the contrasting dynamic of a female vocalist in the mix, Angus started the band’s rebuild by recruiting Toronto-based singer-songwriter Kirty. Since joining the band, Kirty has become an integral force in Fast Romantics, serving as a creative support for Angus and bringing her own wealth of experience to the fold. “She has a brilliant sense of songwriting. We started playing together, and the connection was immediate. I said, ‘OK, I’m going to need you in my band,’” Angus recalls. “She balances me out. Whenever I get too loud, she reminds me that quiet can be more powerful. Whenever I write something trite or obvious, she’ll send me some snippet of a Paul Simon song and inspire me to dig deeper.”

Rebuilding a band is no easy feat, but every other new member—Kevin Black, Nick McKinlay and Lisa Lorenz—fell into place in a similarly organic way, by pulling threads around the Toronto music scene. And while it was tempting to rush right into a new album, Angus wanted the group to take their time and let the lineup stick.

“It was a back-to-the-drawing-board moment, building up a brand-new band, practicing, touring,” he explains. “The songs evolved, and then they evolved again. We all lived through this election cycle side by side in the van, driving around North America. What started as a disparate bunch of personalities and tastes has turned into a genuine friendship, something that feels like a home.”

Fittingly, the results are a culmination of words and sounds about what it might mean to love—or be loved—in the new status quo. What it means to fight for something that feels true, and what it might be like to find a home.

The first single from American Love — the anthemic “Why We Fight”— was released on January 27, 2017, with the album set to be released in April 2017 through Light Organ Records, in partnership with Postwar Records.